My first computer! If you can call it that. Hex keypad input, 9 seven segment led output display. Didn't do anything when switched on until you entered a program, one byte at a time. I was used to the idea of machine level instructions from my day job, but not being able to run a program or even load one from a cassette tape (3 characters per second max.) until you'd entered a loader program, was just too much like hard work. This soon got relegated to the loft.

Wikipedia has some information and links to enthusiasts.

My second, this time, REAL computer. Unfortunately, years in the loft have taken their toll and while the display lights up, it was just full of random characters.

This is a model 2001-8 from 1977, with a small scientific keyboard and built-in cassette player for program loading. A real improvement, but still slow. Diskette drives were available, but too expensive for me. Later versions had full sized keyboards for business users.

The best program on this machine was "Space Invaders", an almost identical game to that available in pubs at the time. 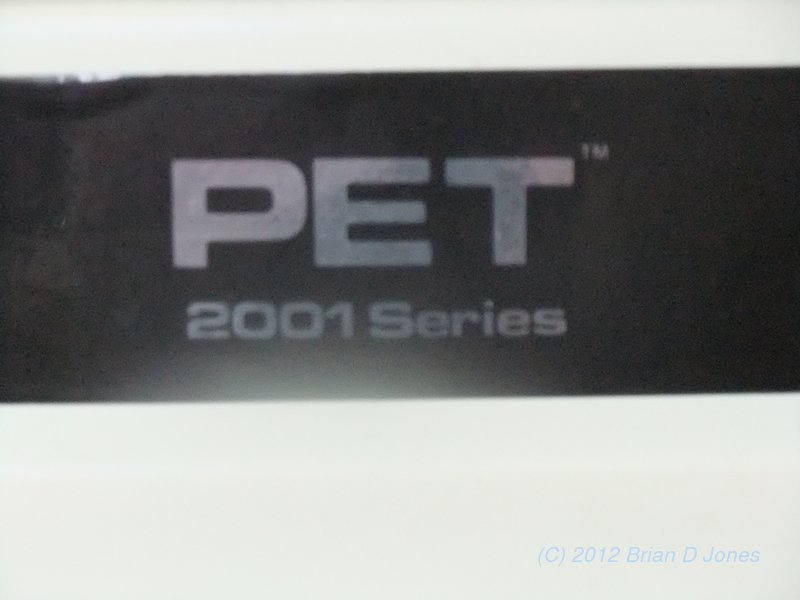 Acquired for a work project, but soon kept for home computing. One of the best machines there have been. Despite using the same 6502 processor chip as the PET, the addition of specialized I/O chips removed pressure from the processor, and it flew by comparison.

I started with a cassette player for program storage, then upgraded to a Hobbit Tape system by Ikon and finally a 5¼" dual floppy drive (home built from spare PC drives and an RS case. Did the job!).

Not too sure how I acquired this, people just give you old stuff if they know you're interested. I kept upgrading my original Model B, trying to match the spec of this machine. By the time I received it, we'd already moved on.

With the need for more power and better graphics, I moved to the Amiga.

Having just set this up again after many years, I could not believe how slow and noisy the 10Mb hard drive is. That's progress, but it was leading edge at the time.